Joe Exotic, aka Tiger King, has responded to Carole Baskin’s claims that her missing ex-husband, Don Lewis, could be alive and well.

Lewis went missing in 1997 and was declared dead in 2002, but in 2021, when the second season of Tiger King was released, Baskin said that she was made aware of an apparent letter from the US Department of Homeland Security claiming Lewis was still alive.

Baskin spoke to Good Morning Britain in 2021 about the moment she discovered the news, saying:

“I was absolutely shocked. I had to watch Tiger King 2, because I knew people would be just carried away by the narrative, like they were the first time around. But when they presented a letter that looked to be from Homeland Security saying that Don was alive and well from five years after I saw him the last time, then I reached out to the FBI and said, ‘I want a copy of that letter. I want to know what that says’ because part of it was redacted and I don’t know who the people involved were. I don’t know how long it will take for me to get that, but I’m really curious about that.”

“One of the really exciting things that came out of Tiger King 2 is that they produced a letter from Homeland Security and it says that a special agent in charge with the FBI at Homeland Security reached out to the sheriff’s detective Jorge Fernandez, which means this had to have happened after 2002, because Homeland Security wasn’t even around until 2002.

“They said my husband, Don Lewis, is alive and well in Costa Rica.

“And yet all of this drama has been made about me having something to do with his disappearance, when Homeland Security has known where he is.”

“I didn’t think he was capable of supporting himself. He took about a million dollars down to Costa Rica, I had agreed to let him do that so he could prove to himself that he could make a living.”

She went on to claim that Homeland Security had known where Lewis was for years, and that all of the drama surrounding her and her potential involvement in his disappearance was unnecessary.

She claimed that she had attempted to recover the cash but found that there was only $80,000 left, due to poor investments.

Watch the interview below:

Despite Baskin’s claims, Lewis has not made any public declaration that he is alive.

In response, Joe Exotic – who’s real name is Joseph A Maldonado, responded to an article written by NX2 and posted to Facebook with the title “Carol Baskin’s ‘Dead’ husband found alive”.

The reality star simply commented ‘No he is not.’ 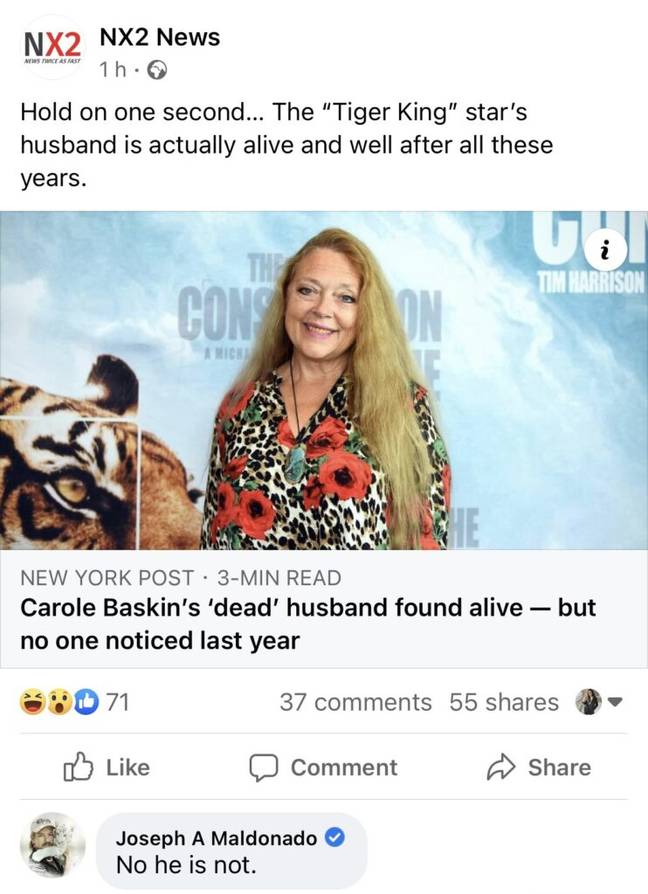 He also shared a statement that was issued by his attorney, John. Phillips to the social media site, which reads:

“During the filming of Tiger King, detailed efforts were made to find Don Lewis. They all failed. He is not alive.”

“The 2021 report by Carole Baskin was further unsupported allegation. It’s being republished as if it has veracity. It doesn’t.”

Exotic is currently in prison serving a 21-year sentence after he was convicted of hiring two people to kill Carol Baskin.